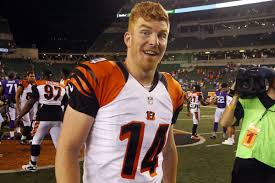 And this is not just Andy Dalton. For more, look no further than the 2016 pro bowl roster.

Of the ten guys that made the pro bowl that year 40% of them stink. Andy Dalton is atrocious. Jerry Jones still should have drafted  Johnny Football instead of that bum that is under center for them now. Derek Carr had one decent season and now Jon Gruden wants to get rid of him, but nobody is willing to take him. Kirk Cousins has the ceiling of Tony Romo, decent stats in the regular season but you know you will never win anything with him.

You can find a podcast about literally anything these days. Let me refer you to a few incase you were curious, if you are looking for a podcast where the host like to smoke pot, talk about baseball, and question the sexuality of celebrities look no further than “High and Just a bit Outside”, available on iTunes and Spotify. If that doesn’t interest you and you are looking for more of a football podcast that talks about the future of kickers in the NFL and also pokes fun of liberal agendas than “Pushed to the Right” will be a good fit for you.

This being said look for a podcast coming soon. Maybe, but probably not I hate my voice and I probably cannot get away with recording a podcast in the back of my office.